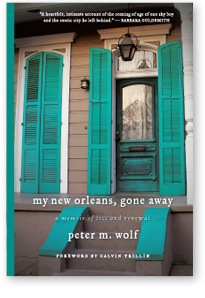 I loved it. It brings back great memories.
- Walter Isaacson, author of "Steve Jobs."

I would recommend it to anybody.
- Alfred Uhry, author of "Driving Miss Daisy."

MY NEW ORLEANS, GONE AWAY: Now in paperback
by Peter M.Wolf
Post-publication Experiences

I did not intend to publish a memoir.

In 2002 I began casually experimenting with the short story genre. I was writing about special moments in my life, primarily for my children and grandchildren, though also for myself. With years of academic publishing under my belt, I wanted to write as a more personal experience: to bring back long-lost voices of loved ones; to again participate in special events of my early years; to enter and unravel suppressed feelings and memories.

After eight years of weekend writing, Christopher Lehmann-Haupt, former book reviewer for The New York Times, read some of my work. He said to me: "Your collection of short stories could be shaped into a book. Your writing is the story of a generation, the story of America. And I'd like to be your editor." Taking his word for it and a bit stunned at his praise, I began working closely with Christopher and the publisher and editorial staff at Delphinium Books. Four years later, My New Orleans became a reality.

The immediate press was thrilling. In his full page Wall Street Journal review with the headline "The Place He Once Was From," Winston Groom observed: "(Wolf's) memoir is about his city, its snobby topside and seamy underside, about New Orleans contrasted with the Ivy League, and about how he came to be, of all things, an urban planner when, in this reviewer's opinion, he should have stuck to writing." My book received very favorable press from many other newspapers, magazines, talk show hosts, and radio and television commentators.

But it was Walter Isaacson-a celebrated and accomplished fellow New Orleanian and author-who memorialized what I found most gratifying. His endorsement was succinct: "I loved it. It brings back great memories." I was delighted by Isaacson's underlying message: not my story, but his, had been invoked. My project-with its universal themes of fear, loss, shame, prejudice, striving, forgiveness, risk taking and love-created openings into the lives of others, for themselves. While writing a book, I'd created a multi-faceted mirror.

The flood of correspondence from all over the country lasted over a year and a half. In letters and emails people of all ages reached out and told me of ways they reconnected to parts of their own past in reading my memoir. Many ended their notes with "thank you for writing this book." I responded to each one, and through this process rekindled old friendships and established new ones, enlarging and enriching my life.

Something else happened. Something even more unexpected: writing about our family's six generations in New Orleans triggered intense curiosity about my deeper past. I developed an intuition that before France my ancestors had once lived in ancient Tuscany (Etruria).

While finishing My New Orleans, during two residencies at the American Academy in Rome, I began to investigate Etruscan civilization which flourished along the Mediterranean from Rome to Florence from about 800-100 BC. No one to this day knows where the Etruscan people came from or the root of their enigmatic language. So I was all the more intrigued.

I joined a responsible global DNA study - the Genographic Project. Results show that my ancestry is predominantly Mediterranean, with a close match to people who arrived in Sardinia more than 7,000 years ago from the Fertile Crescent in the Middle East. Sardinia is only a 225 mile straight shot across the Tyrrhenian Sea to the Etruscan lands.

Herodotus (c. 484-425 BC) wrote that the Etruscan homeland had been Lydia (western Turkey, along the Mediterranean). I traveled there to examine evidence of Jewish presence in particular communities. I then proceeded inland toward the Fertile Crescent to Hittite territory in Cappadocia (central Turkey).

For me, the next step may be to combine a passionate curiosity about the art and culture of earlier civilizations with my on-going self-directed education as a writer. To merge fact and imagination is a literary plunge I would not have dared prior to writing My New Orleans.

Where indeed are we from?

MY NEW ORLEANS, GONE AWAY: A Memoir of Loss and Renewal
by Peter M. Wolf
Foreword by Calvin Trillin