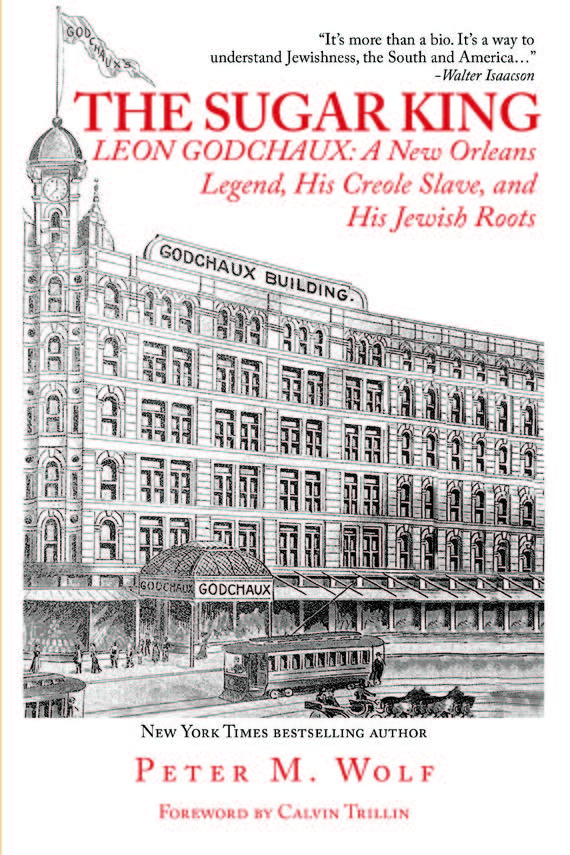 "It's more than a bio. It's a way to understand Jewishness, the South, and America."

"There are eye-openers in nearly every chapter".

"Godchaux's extraordinaty achievements and life story have been both fogotten and in many respects until now all but unknown. The Sugar King filles that gap in a lively narrative."

Read the reviews in full below.
Purchase| Reviews/Media| Photos| Contact

ABOUT The Sugar King

A penniless, illiterate, Jewish thirteen-year-old from France crosses the Atlantic alone. He lands in raucous and polyglot New Orleans in 1837, the third largest city in America. He starts out as a peddler of notions to plantations along the Mississippi. He remains unable to read or to write in English or in French his entire life.

Nevertheless, by the end of his intrigue-filled life Leon Godchaux is known as the "Sugar King of Louisiana", the owner of fourteen plantations, the largest sugar producer in the region and the top taxpayer in the state. He refuses to enter the sugar business until the end of slavery. Unsympathetic to the Lost Cause, caught up in the Civil War, and negotiating Reconstruction and Jim Crow, Godchaux simultaneously builds an esteemed New Orleans clothing empire. Godchaux relies on the accomplishments of two Black men: Joachim Tassin's life is twined with Leon Godchaux in his clothing business, a slave whose birth status both men conceal; and Norbert Rillieux, a free man of color whose overlooked ingenious invention enables Godchaux to build his sugar empire.

"It's more than a bio. It's a way to understand Jewishness, the South, and America. This is the fascinating story of Leon Godchaux, a penniless immigrant who rose to great riches in Louisiana, as well as a mysterious man of color, Joachim Tassin, who was by his side. It's not only a rags-to-riches tale, it's a story of ambition and humility, otherness and assimilation, and the wondrous complexities of the South and America."

"Peter Wolf's The Sugar King is an absorbing ancestral journey. From a small village in France to the deepest corners of the Crescent City, Wolf looks for the hidden clues of history as he documents' and imagines' the remarkable rise of his Jewish great-great grandfather Leon Godchaux and the Black men, enslaved and free, who shaped it in profound ways."

"Peter Wolf's The Sugar King is a remarkable, vivid, and meticulously researched story about an unjustly forgotten major figure of the nineteenth century: Wolf's great-great grandfather, Leon Godchaux. The story of Godchaux's rise from penniless, illiterate teenage immigrant to tycoon in two unrelated businesses, retailing and sugar, would be implausible if it weren't true--and so would the story that Wolf has unearthed of Godchaux's unlikely lifelong friendship and business partnership, across Louisiana's racial divide, with Joachim Tassin, a Black man born enslaved."

"There are two great icons in the history of Louisiana over the last century and a half, Leon Godchaux and Samuel Zemurray. No other individuals have been more prominent . Zemurray's ("Sam the Banana Man") story, twined with the founding of the United Fruit Company, is well known. In contrast, Godchaux's extraordinary achievements and life story have been both forgotten and in many respects until now all but unknown. The Sugar King fills that gap in a lively narrative filled with new information and fascinating detail."

"Finally, an in-depth, well-researched biography of one of the most remarkable individuals in Louisiana history. Peter Wolf's The Sugar King: Leon Godchaux tells the incredible story of a poor immigrant peddler of French Jewish origins who, in a complex decades-long business relationship with a Creole of color named Joachim Tassin, became a leading clothier in New Orleans, a major manufacturer and merchant, a builder of railroads, and mostly importantly, the "Sugar King of Louisiana," revolutionizing the growing and processing of the region's most important crop. Leon Godchaux's legacy lives on today, through his philanthropy and through his progeny, among them Peter Wolf himself' great-great-grandson of the Sugar King, who here writes a life story that begged to be told."

"There are Horatio Algers, and then there is Leon Godchaux, a French Jew who strapped on a peddler's backpack upon arriving in pre-Civil War New Orleans penniless and unlettered and walked his way into history. Fifty years on, Godchaux had become not only the city's clothing baron but Louisiana's sugar king. (He left his mark on its railroads, too.) Peter Wolf, an urbanist and well-known writer, has done a masterful job unraveling the strands of his great-great grandfather's stunning ascent from rags to riches. There are eye-openers in nearly every chapter, none more surprising than the saga of the mixed-race Joachim Tassin. Everyone who has visited this subject in the past has gotten it wrong. Wolf's dogged effort to get to the bottom of Tassin's biography is alone worth the price of the book. It's a book that specialists and general readers alike will profit from."

Peter M. Wolf is an award-winning author. His 2013 memoir, My New Orleans Gone Away, reached the New York Times e-book Best Seller list. Previous books such as Land in America and The Future of the City have been honored by The National Endowment for the Arts, The Ford Foundation and The Graham Foundation.
Wolf was educated at Yale, Tulane, and New York University's Institute of Fine Arts. His research has taken him to Paris as a Fulbright scholar and to Rome as a visiting artist/scholar at the American Academy in Rome.
In New Orleans Wolf is a trustee of the Louisiana Landmarks Society and serves as a member of the Advisory Board of the Tulane University School of Architecture. In East Hampton he is a trustee of Guild Hall and the Village Preservation Society

RETURN TO THE TOP OF THIS PAGE TO CONTINUE